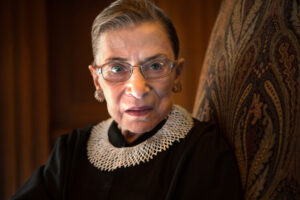 This is something she told me when I started law school. Whenever you take notes — whether it’s in class, or at a hearing, or in any arena that you might be taking notes — always read them back after that event has ended, whether it’s the class, or the meeting, or the hearing, or the oral argument. By just taking those extra five minutes to read the notes right there in the moment you will cement those notes and the succinct nature of what you boiled down from what may have been a 45-minute oral argument or a 90-minute class, and that will go into your brain and you will retain it much better than if you just write the notes and forget them and revisit them a week, or two weeks, or a month later. That sounds really silly, but I will say the classes I did that in, I always performed better than the classes where I didn’t do that. It’s a practice that I’ve taken to heart now in my life as a practicing attorney. That’s one real skill that everyone can say they learned from a Supreme Court justice.

No matter what stage of law you’re at, you should not forget the other important things in your life. Whether that’s family, whether that’s arts and entertainment, whether that’s sports, whether that’s reading for pleasure — all of these things are parts of a whole human, and no person should ever be so consumed by their work that they can’t also enjoy the important things. That said, there will be times when those other things don’t get priority, when they have to be put aside, because the work is that important. My grandmother would often say, you can have it all, but you can’t have it all at the same time. Prioritizing when the work comes first, or when family comes first, is something that each individual has to learn to balance on their own, but it does not mean that an important element of your life has to be abandoned in the pursuit of a successful legal career.

— Clara Spera, granddaughter of the late Justice Ruth Bader Ginsburg and a fellow at the ACLU’s Ruth Bader Ginsburg Liberty Center, offering advice she’d received from her grandmother that was applicable to lawyers, during an event hosted by the New York State Bar Association that focused on Ginsburg’s legacy. Spera was joined by four of her grandmother’s former clerks: Dean Trevor Morrison of New York University School of Law; Subash Iyer, special counsel for ethics, risk and compliance at the Metropolitan Transportation Authority; Rachel Wainer Apter, director of the New Jersey Division on Civil Rights at the New Jersey Attorney General’s Office; and Gillian Metzger, Harlan Fiske Stone Professor of Constitutional Law at Columbia Law.

Staci Zaretsky is a senior editor at Above the Law, where she’s worked since 2011. She’d love to hear from you, so please feel free to email her with any tips, questions, comments, or critiques. You can follow her on Twitter or connect with her on LinkedIn.